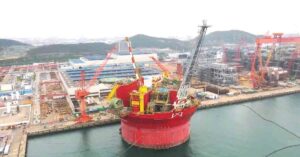 A floating production, storage, offloading (FPSO) vessel that weighs about 32,000 tons and is 118 meters tall and built by the Offshore Oil Engineering Co. for a Britain-based client was delivered successfully in Qingdao, Shandong Province of East China on Tuesday.