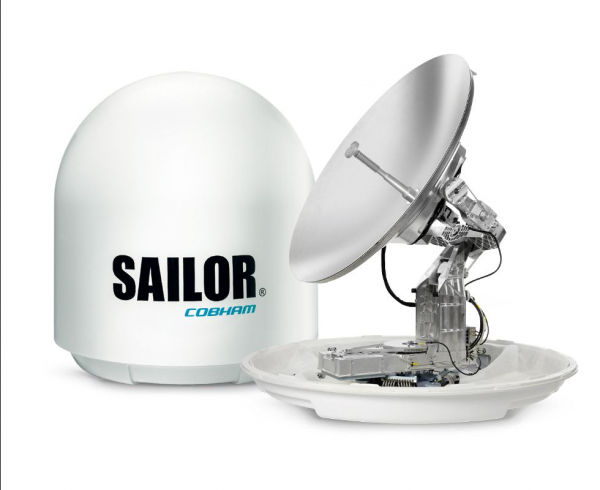 SAILOR XTRTM, which has been developed and designed by Cobham SATCOM, integrates the best of the SAILOR VSAT technology into a new platform with cutting-edge software and electronic capabilities that prepare it to operate in future satellite constellations in LEO, MEO, GEO and HEO orbits. The one-metre antenna has a new simplified and robust pedestal for better antenna performance and easier and simpler conversion between Ku- and Ka-bands.

A new Ethernet port inside of every above-deck SAILOR XTRTM unit facilitates new connectivity options. Solution Partners could use this to integrate third-party devices such as cellular transceivers and Wi-Fi access points. The additional data from these devices gets securely routed at up to 1 Gbps to an Ethernet port on the SAILOR XTRTM Below Deck Unit. The antenna also comes with a new XTR Antenna System Control Module (ASCM) with a hardware encryption key chip mounted inside. The XTR ASCM is networked to all other modules and motors via a star network topology for speed of data exchange and reliability. It only accepts Cobham-signed software, which makes it impossible for others to read out the private key, which is programmed into the key chip, thus protecting the antenna from potential cyber-attacks.

Additionally, the true one-cable solution on SAILOR XTRTM not only manages Rx, Tx and power over a single coax cable but can also transfer high-speed data from a third-party device which could be mounted inside of the antenna to below-deck. To ensure uptime, the antenna platform also maintains Cobham SATCOM’s Rapid Deployment Technology. This ensures a fast, hassle-free rollout for ship owners and operators, as well as improved and extensive self-diagnostics for optimal performance and reliability.

Cobham SATCOM has already installed the first SAILOR 1000 XTRTM Ku on a vessel operating in rough Scandinavian waters. The installation was completed on the Pearl Seaways with owner DFDS in attendance.

“Through the development of SAILOR XTRTM, a reliable, agile and high performing VSAT solution, Cobham SATCOM has once again set the standard for the future of maritime satcom. In an era of unprecedented uncertainty and technological complexity, the new advanced science underpinning SAILOR XTRTM will drive greater simplicity for ship owners and operators while enhancing performance. This will ultimately give them more time to focus on business-critical issues, while handing them the data necessary to identify cost-effective solutions to address and analyse a myriad of complex issues; from transparency to environmental compliance and seafarer welfare,” said Jens Ewerling, product manager, VSAT at Cobham SATCOM.