These market distortions are a roadblock to a cleaner energy future, and the IEA has long supported international efforts to phase them out. At their recent Summit, G7 leaders reaffirmed their own commitment to eliminate inefficient fossil fuel subsidies by 2025 and called on all countries to join their undertaking, “recognising the substantial financial resource this could unlock globally to support the transition”.

A key IEA contribution to this process is our monitoring of the energy prices that consumers pay around the world, which we compare with reference prices reflecting their full market value (the so-called “price gap” methodology for estimating consumption subsidies.)1 In this way, we can estimate the size of global fossil fuel consumption subsidies over time.

In 2020, the fall in fossil fuel demand and prices pulled the value of these fossil fuel consumption subsidies down to a record low: our estimate of just over USD 180 billion is some 40% down from 2019 levels and is the lowest annual figure since we started tracking these subsidies in 2007. However, rebounding fuel prices and energy use, coupled with hesitant progress on pricing reforms, are likely to push the value of these consumption subsidies higher again in 2021. This is a worrying trend at a time when countries need to be redoubling efforts to accelerate energy transitions. 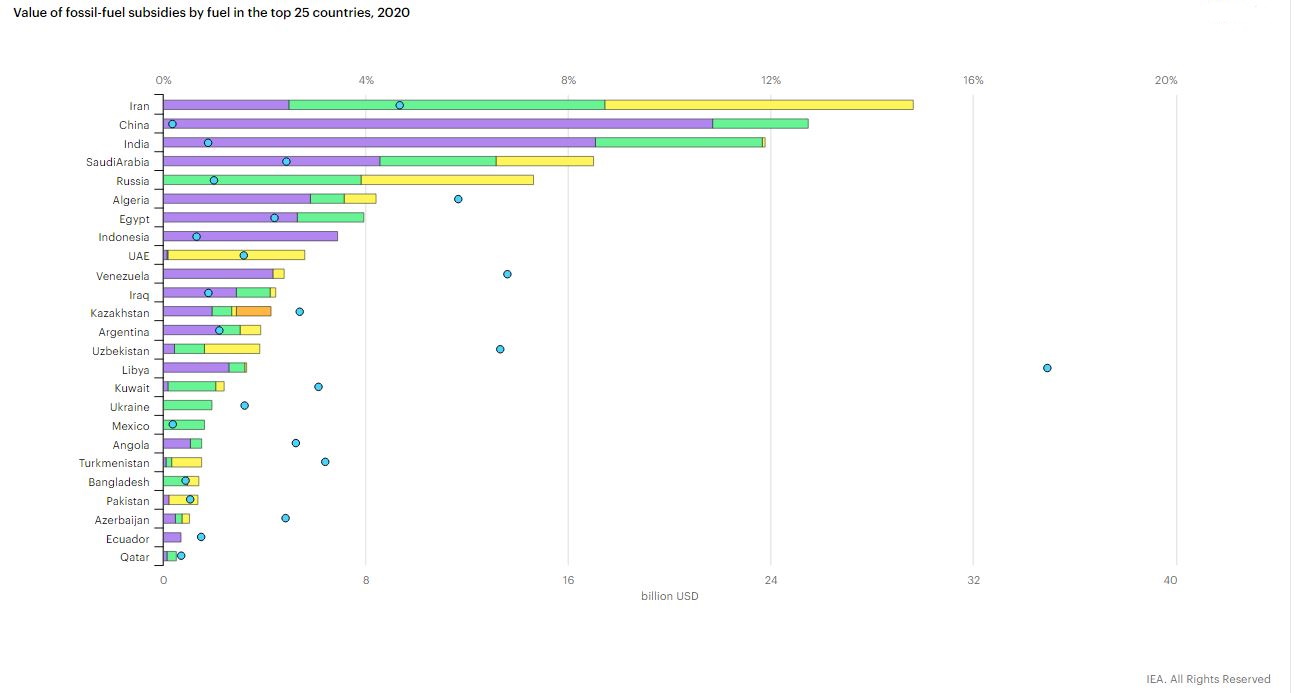 The decline in consumption subsidies in 2020 was supported by initiatives from some governments to align domestic prices with international ones (see examples in the table below). However, a much larger share of the fall was a purely mechanical effect from lower global prices and consumption, which narrowed the gap between regulated prices and market-based ones.

The different approaches to pricing are clearly visible in the IEA’s tracking of energy prices. Countries with market-based pricing follow changes in the underlying crude prices (with a time lag as these work their way through the refining sector to consumers). This is visible in the data below for the United States, Germany and Italy. Still, actual price levels are far from uniform as taxes and charges on diesel, gasoline and other fuels vary widely from country to country. These are often important sources of revenues, providing as much as 10% of public revenues in some countries (and, therefore, a serious public policy dilemma as fossil fuel consumption decreases during transitions). 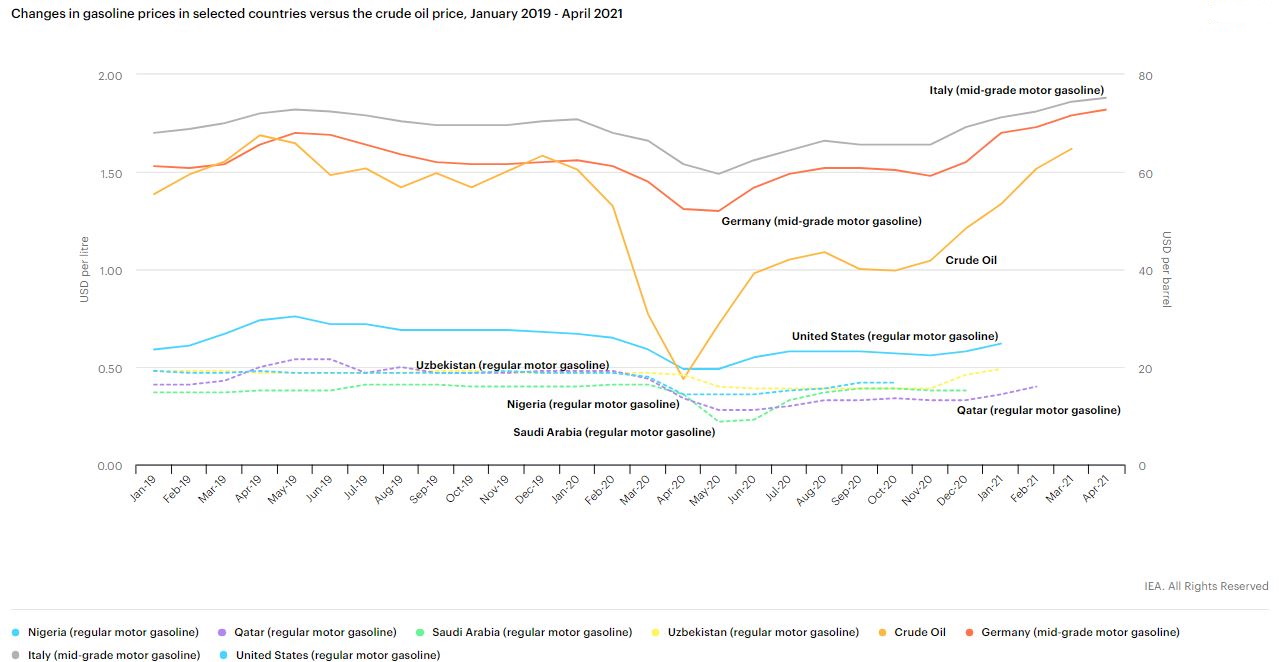 However, there are also countries where the response to international price levels is either absent or constrained in some way. In the data above, end-user gasoline prices hardly changed in Nigeria and Uzbekistan following the huge crude oil-price declines in 2020. Multi-country IEA price data (shown below for gasoline) clearly show the wide range of end-user prices across countries, with the lowest prices found in countries that subsidise consumption.

The complexity of fuel pricing reform was illustrated again during the social and economic upheaval caused by the pandemic. Lower global oil prices opened up an opportunity for reform, as the narrower gap with market-based prices reduced the risk of political or social backlash, or a jolt to inflation. In major oil and gas producing countries, lower revenues from hydrocarbons created severe fiscal strains, increasing the pressure to eliminate implicit fuel subsidies.

However, while pricing reforms made progress in some countries, the severe economic and public health crisis caused by Covid-19 led some governments to maintain or even reinforce consumer subsidies as a way of supporting household and business finances; such initiatives tended to be concentrated in the electricity sector.

Fossil fuel prices have risen in 2021 after the initial shock of the pandemic, widening the gap between international market prices and low, fixed prices for consumers in some countries. In the absence of additional reform efforts this will increase pressure on government budgets, and favour wasteful fuel consumption and higher emissions – all outcomes that the world can ill afford.

Renewed impetus behind pricing reform is essential. The new IEA Net Zero by 2050 analysis underlines once again that removing inefficient fossil fuel subsidies is an integral part of the policy mix to tackling climate change. There are many examples of successful reform to guide policy makers, showing the multiple benefits of well-designed phase-out programmes. The ingredients for success are well known: a clear and graduated timetable that is clearly communicated and explained to consumers, schemes to mitigate the impact on the poorest and most vulnerable sections of society, and efforts to increase the supply of high-efficiency appliances to cushion the impact on all consumers. Pricing reform is politically challenging but economically and environmentally essential if the world is to get on track for a more sustainable energy future.
Source: International Energy Agency (IEA)