It’s often said that a pessimist sees the difficulty in every opportunity, while an optimist sees the opportunity in every difficulty. As a natural optimist, I can see the huge opportunity the energy transition presents for aluminium: the buildout of low-carbon energy supply and transmission will consume vast quantities of primary aluminium and associated alumina and bauxite.

However, I’m also a realist, so I’m fully aware that increased aluminium production will generate a large – and growing – carbon footprint. Ironically, the rate at which aluminium industry emissions can be reduced at scale will be determined by the buildout and availability of low-carbon power, which itself requires the use of low-carbon aluminium, amongst other metals. This is what I call the ‘energy transition circularity’.

So, can aluminium cut its emissions intensity fast enough to be truly part of the solution?

The primary aluminium industry accounted for around 2.6% of global GHG emissions in 2020. Around 70% of the emissions arising from aluminium production came from China, despite it only producing 57% of the global total output. This reflects the dominance of coal in China as a power source for both smelting and refining aluminium, with coal accounting for 85% of the energy used for smelting and 87% of the energy used in refining.

Cradle-to-gate (i.e. the raw material supply chain from extraction to factory gate) accounted for 22% of total primary aluminium GHG emissions, with coal accounting for 68% of the energy supply for refining. If the alumina refining industry were to switch to gas this would lead to a 26% reduction in emissions. There is also the potential to reduce emissions by making greater use of electrical heating for process steam generation, but that requires the availability of commercially viable green electricity. 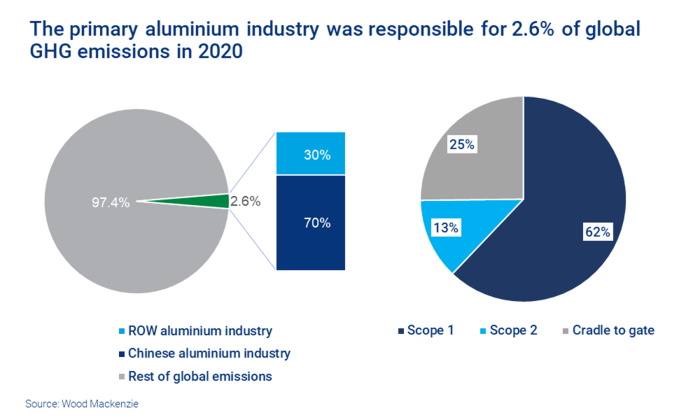 How will aluminium emissions intensity be reduced?

Our base case projects that primary aluminium supply will rise by 24% or 16 Mt by 2030, to allow for stocks to return to normal levels. Based on known changes to power sources and specific energy and emissions reduction plans, the intensity of carbon dioxide equivalent (CO2e) emissions will decline by just 6%.

By far the largest contributor to the decline will be Scope 1 emissions – direct emissions from owned or controlled sources. These are set to fall by 10% as producers introduce more efficient smelters into the global fleet, undertake limited switching of power sources, and drive carbon efficiencies. There will also be some limited application of inert anode technology (in which the traditional carbon anodes are replaced in favour of inert materials), but we believe commercial adoption will be slow this decade.

By contrast, aluminium’s Scope 2 emissions – direct emissions from purchased electricity – are set to rise over the coming decade. This reflects the concentration of expansion in Asia, where coal-based power sources will continue to dominate.

As noted above, there is scope for significant reductions in supply chain emissions using gas or electrical heating in alumina refineries. A 100% switch from coal to gas for alumina refining could offer a potential 26% reduction in cradle-to-gate emissions intensity. But, with low-cost coal the preferred energy source, particularly in Asia, progress will be slow this decade. 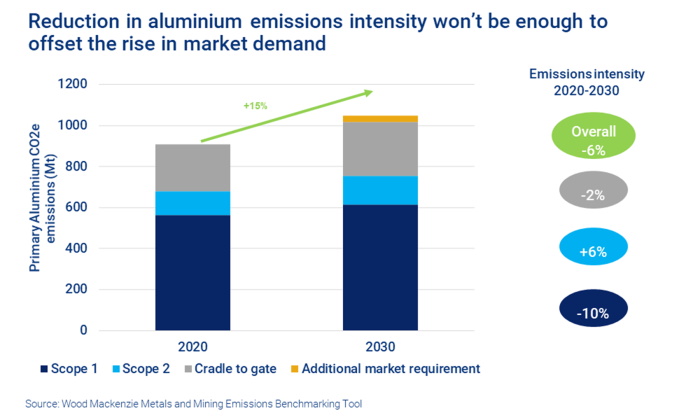 Despite limited reductions in CO2e intensity, a significant expansion of primary production (driven in large part by energy transition needs) means CO2e emissions from aluminium production are set to rise in absolute terms over the next decade. Our modelling indicates that, even with a willingness to build or procure low-carbon power and reduce process carbon emissions through inert anode technology, total industry emissions will rise by 15% over the next decade. The grid will not be able to decarbonise fast enough to allow the aluminium industry to meet the needs of the energy transition while also cutting its emissions.

A rapid expansion of secondary (recycled) supply and use could offer a fast-track solution, given that secondary aluminium has 5% of the GHG emissions intensity of primary. However, in most of the electrical applications that are critical to the energy transition, secondary material cannot be used. Also, a massive expansion of recycling will require policy and societal change, neither of which will be quick.

Part of the problem… for now

Going back to my opening comments, do I feel optimistic or pessimistic about aluminium’s role in the decarbonisation journey? In my view, the aluminium sector will be part of the problem of carbon emissions for the next decade. However, the optimist in me believes that ultimately it will be part of the solution by helping to deliver low carbon energy. But it’s going to take time, and when it comes to tackling the decarbonisation challenge, time is in short supply.
Source: Wood Mackenzie