The ships’ recycling market has sprung back to life this past week, after a lack of activity during the past few weeks. In its latest weekly report, shipbroker Clarkson Platou Hellas said that “with various negotiations rumoured to be in place this week, the market appeared to come back to life with cash buyers spraying numbers across the various Offshore and specialist units that were on offer. This has been encouraging as there were murmurings of a small correction after sentiment had been impacted by the start of the monsoon season and continued Lockdowns in Indian sub-Continent where the Pandemic continues to cause huge disruption to working life and ongoing difficulties for Buyers on as-is deals due to the almost worldwide ban on Indian Crew changes. Although despite the improved pickup in activity, the lack of actual sales is evident once again and we are still some way off what we consider the ‘old times’ in the market.

This lack of tonnage looks set to continue, unless the rumours around the U.S. Biden administration lifting the imposed sanctions on Iran is true, which would inevitably push the oldest ships from the fleet to the recycling market as the crude tanker sector becomes over saturated and affect charter rates. Meantime, the Bangladesh budget through up no real surprises with no major effect to the recycling industry and we will know next week as to the announcement from Pakistan”, the shipbroker said. 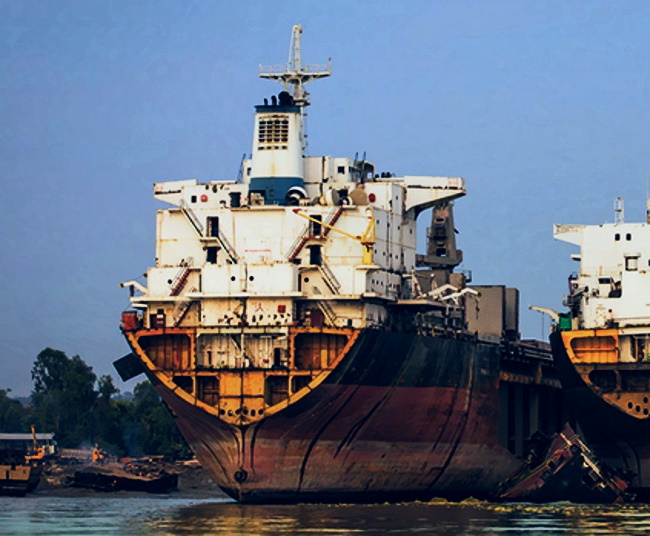 In a separate note, Allied Shipbroking added that “a gradual slowdown is expected in the ship recycling market as we have not entered the monsoon period in the Indian Sub-Continent as of yet and as freight earnings in the dry bulk and containership markets continue at robust levels. This past week we witnessed again that the majority of ship recycling activity is focused on the tanker and offshore units. In Bangladesh, all attention was focused last week around the announcement of the annual budget, which seems as though it will not massively affect business levels. The positive news is that taxes are anticipated to be reduced, giving a boost on the attractiveness of fresh business to follow. 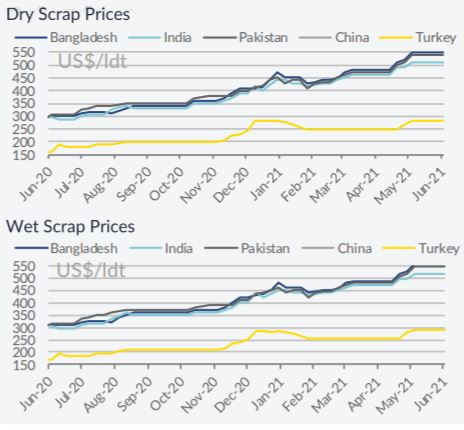 However, the drop in steel prices noted as of late has curbed somehow the level of action taking place in the country. In India, the improved picture in the domestic hospitals and the reduced COVID-19 cases has boosted optimism in the country. As a result, oxygen supplies seem to now be released for use by scrapyards once again, allowing many to restart their operations. Finally, the boosted offered prices of late in Pakistan have helped local players increased their market share, which is likely to continue to boost local demolition business in the coming weeks”.

Meanwhile, GMS , the world’s leading cash buyer of ships commented that “with budgets due in both Bangladesh and Pakistan this week, it has been somewhat of a tentative period for both markets, with much of the recent momentum stalled whilst rates and sentiments have been declining (in Chattogram in particular). We certainly do not expect there to be any dramatic outcome in either budget that would negatively affect current prices. However, as usual at this time of the year, End Buyers would rather play it safe & avoid any unwarranted surprises and would rather have ships delivered before the budget is implemented, in the event additional taxes are imposed on the ship recycling sector.

The Indian budget recently passed as well, without much fanfare or adverse effects on the domestic ship recycling sector. Meanwhile, Covid-19 cases are reportedly declining across the country as oxygen supplies to local yards resumes once again and Alang gradually comes back online. Steel plate prices remain positively poised in both Alang and Gadani this week, where demand is ramping up once again, having recently lost a majority of the larger LDT tonnage to an ever-bullish Bangladesh. Chattogram Recyclers, on the other hand, have started to see their steel prices cool off going into the traditionally weaker summer / monsoon months and they have started losing (particularly some of the bigger units) to an improving Gadani market of late. Finally, the Turkish market has seen a further improvement in steel plates as levels stay steady for another week”, GMS concluded.
Nikos Roussanoglou, Hellenic Shipping News Worldwide