The dry bulk market is slated for a renewed rally during the summer months, one which could see rates return to records not seen since 2008. In its latest weekly report, shipbroker Allied Shipbroking said that “last week’s (7-11 June) stellar performance in the dry bulk market could well be a good sign of W-O-W change things to come. With the rapid rise in freight rates noted over the past few days coupled by the strong resurgence being noted in commodities market prices almost seems like a precursor of what is about to unfold. The massive gains noted across all market fundamentals since the start of the year across by these most recent positive signs leave for a feel that this year’s summer months could well be sit “ablaze” in terms of freight rates, leaving us with a possibility of seeing levels not seen since before the great recession of 2008”.

According to Allied’s George Lazaridis, Head of Research & Valuations, “this rise is clearly driven by the insatiable appetite China has shown for imports of raw commodities of late. China’s central government bodies may well have put a major emphasis over the past few months in tackling the record pace that has been recorded in the commodity prices since the start of the year, but up to this point it seems all this effort has had minimal effect. Iron ore prices jumped on Friday to their highest level in more than three weeks, touching once again the US$ 220 per tonne mark. This has been on the back of a sharp rebound in still production being noted, indicating the strong appetite still held for higher import levels.

At the same time there is indication that much of this strengthening has been in part pushed by the expectation of further steel production output curbs as China intensifies its aim to counter air pollution. This may well have had a dual effect as steel producers race to increase steel inventories before any further measures take effect, while at the same time have pushed for higher quality imports in order to reduce their emissions. Iron ore has not been alone in this climb, with coal, grains and other minor bulks following a similar pattern”.

Lazaridis added that “all this has not been without its drawbacks. China’s producer prices of goods from China’s factories have risen at their fastest pace in 13 years. China’s PPI (Producer Price Index) rose by 9% year-on-year in May, marking it its biggest increase since September 2008. This has been a major worrying sign, as many come see this as a potential Chinese imported inflation. During April the U.S. posted an annual rate in consumer prices of 4.2%, also the highest level noted since September 2008. 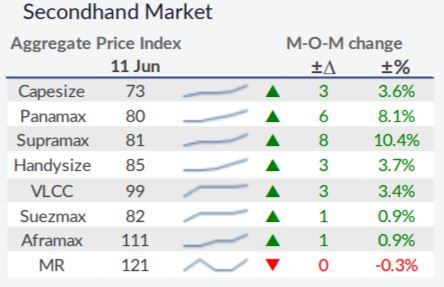 Rising costs have been quick to spread across the globe and the fear is that such inflationary pressure could stifle consumption in the long-run, despite the boost being noted since the start of the year. Businesses may have seen a rejuvenation in recent months and unemployment levels may well have started to subside as the global economy regains its “feet”. Yet if things heat up by too much and too quickly in terms of prices, the inflationary pressure could potentially bring everything back to a halt. That is the reason why most governments are keeping a key out on the trends noted in recent months and why China has placed particular focus in holding back further price hikes from speculation and “trader hording” in the raw commodity markets”. 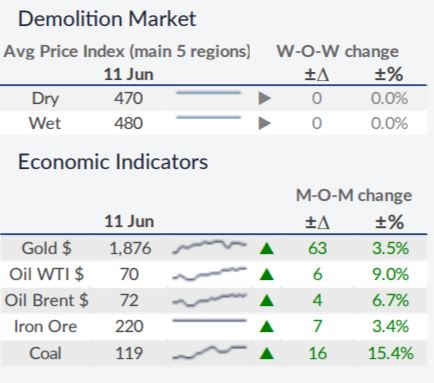 “Yet despite what concerns all this may raise for the long-run, the summer months look set for an unparalleled performance. Given the seasonal hikes that we have see in demand for these dry bulk commodities, the feel is that a new high in freight rates may well be reached before the end of August. As always though, and given the potential for excessive risks still at play, any such assumptions on the interplay of past performance and current trends should be taken with a hefty pinch of salt”, Allied’s analyst concluded.
Nikos Roussanoglou, Hellenic Shipping News Worldwide