With the impact of the Russia-Ukraine war on commodity markets softening as the new year knocks and several countries aiming to raise production, Asian thermal coal prices are expected to see a reasonable correction in 2023 given that supply concerns will likely take a back seat.

Indonesia, China and India have all announced higher production targets for the next year as part of their larger goal of meeting domestic needs internally, which is expected to lessen the load on the Asian thermal coal trading market, according to miners, traders and buyers surveyed by S&P Global Commodity Insights.

The Russia-Ukraine war shot Asian thermal coal prices to record levels in 2022 as additional demand from Europe, which sanctioned Russian fuel, created supply tightness. Even though prices have receded in recent months, they remain at levels higher than the average of the last two years.

“Overall demand is expected to remain strong due to the robust economic outlook of countries like China, Indonesia and India. The impact of war will gradually ease as countries are adapting to new trade flows… India and China may continue to buy Russian coal, while also expanding their domestic production,” an Indonesia-based miner said.

“In Indonesia, miners will increase production, more of low- to mid-CV coal, because the domestic demand is also likely to rise on an expected rebound in the industrial and housing sectors,” the miner said.

Based on discussions between Indonesian miners and the government, the production target for next year stands at 690 million-700 million mt, above the 663 million mt targeted for 2022. 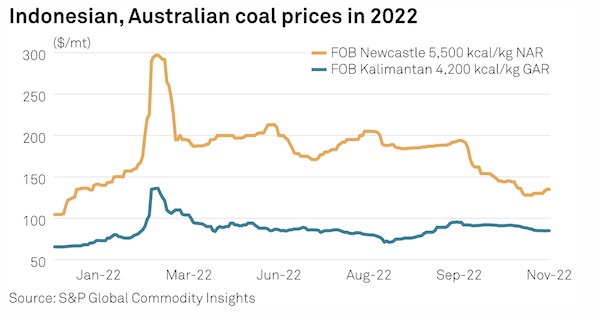 “We don’t expect weather anomalies around July and most of the first half of 2023. The problems of unavailability of heavy machinery have been sorted out,” the producer said.

Indonesia’s projection for coal demand from the power sector is 161.15 million mt in 2023, up from an estimated 127.5 million mt for 2022 projected in December 2021, of which state-owned electricity utility demand is expected at 81 million mt. Demand from the country’s cement and fertilizer industry are expected to rise as well. For the 2022 target, upward revisions for state-owned PT Perusahaan Listrik Negara, or PLN, have been made during the year in the range of 5 million-8 million mt, but no such revisions were notified for the non-power sector.

“We think that the market has lost its legs and will be lower in 2023,” a Singapore-based trader said, adding chances of a mild recession in Europe and Asia will also impact demand as well as pricing. “Demand is going to be weak in China and India, as domestic production will be higher.”

Sources expect Chinese demand in January to be weak due to Lunar New Year falling in the second half of the month in 2023, but some stability is likely in the next two months thereafter.

“As can be seen in the last few weeks, China’s emphasis on the economy and the relaxation of epidemic prevention and control are something which will show result after some time,” a China-based trader said.

S&P Global forecasts India’s imports in 2023 at 170 million mt, 5%-6% higher on the year, while the 2022 forecast was 11% higher on the year. “Renewables should show an increase for the year due to new capacity, and coal-fired power generation should only increase by about 2 GW year on year to 140 GW,” S&P Global said in a report in November.

India’s coal production totaled 448.17 million mt over April-October, up 18.06% on the year, while state-run Coal India Ltd., which accounts for over 80% of coal mining in the country, produced 351.93 million mt, up 17.46% over the same period. The country targets producing nearly 1.2 billion mt of thermal coal domestically by 2024.

Meanwhile, amid rising competition from coal from South Africa, Mozambique and Russia at comparable or lower prices, demand for Australian 5,500 kcal/kg NAR coal with 23% ash grade is expected to be mild.